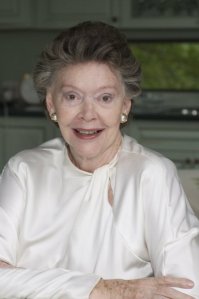 is a synthesis of eighty years of living, loving, learning. The column first appeared daily in the Toronto Sun and then The Toronto Star where topics included relationships, family, women’s issues, and politics. Those very personal subjects will also be part of the Blog version. But, now, like the families of  millions of  other Alzheimer patients I have learned  that Alzheimer’s is a disease of the brain that is paid for with the currency of the heart, and I share with readers what I learned during my seven years as a caregiver for my husband and in my struggle to come to terms with being a widow.

When the column appeared in print, readers responded generously with letters, agreeing, disagreeing, expanding, correcting, sharing.  I hope they will continue to do that in this forum. I look forward to renewing old acquaintances and meeting new friends.

Joan Sutton Straus was born in Canada and became one of its best known journalists. Her byline has appeared in The Toronto Star, The Toronto Sun, The Houston Post, and The Boston Herald, and her commentaries have been aired on the Canadian Broadcasting Corporation as well as CFRB radio. A member of the board of overseers of The Alzheimer’s Drug Discovery Foundation (ADDF), she is a co -founder of ADDF/Canada. She has served on many non-profit boards, including The Citizens Committee for New York City, The American Academy of Dramatic Arts, the Peggy Guggenheim Collection, The Banff Center and The Shaw Festival. In 1990, the Government of Ontario named her Agent General to the United States, heading up offices in New York City, Atlanta, Chicago, and Dallas. She has served as a director of Ontario Place, The Personal Insurance Company, 812 Park Avenue Corporation, and 7 Gracie Square Corporation.

Ms. Straus has received numerous awards for public service, including the Canada Commemorative Medal, the Theodore Roosevelt Award for Public Service and she is an honorary Freeman of the City of London. She is the author of The Alzheimer’s Diary, One Woman’s Experience from Caregiver to Widow, (iUniverse), which is available at your favorite bookstore.  100% of the author’s royalties benefit the Alzheimer’s Drug Discovery Foundation/Canada. 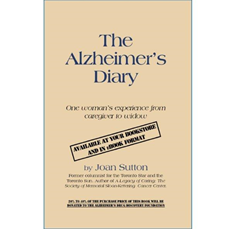 PRAISE FOR THE ALZHEIMER’S DIARY BY JOAN SUTTON

“I just finished reading The Alzheimer’s Diary. It has to be one of the most beautifully written books I have every read…. really astounding. And so many of the observations she made were things that probably most of us take for granted, until they’re gone. So, an amazingly worthwhile read.”

“Joan has written an important book about a disease that will likely touch everyone eventually and can bankrupt the world’s healthcare systems unless a cure is discovered.”

“With practical advice for caregivers, important information about the state of Alzheimer’s research and a moving record of her life after losing a loved one to Alzheimer’s, Sutton’s powerful memoir is at once distinctive, instructive and deeply reliable.”

“I stayed up last night and read your entire book of essays.   It is beautifully written, full of information, so clear, so personal and moving.  I could not sleep after I read it, I was so disturbed and stirred by the deep love that comes through your story, and by your loss.”

.The book “The Alzheimer’s Diary” is amazing and its contents mirror my own experience! I also found it interesting that both the author Joan Sutton and I are actively involved in Alzheimer’s and Dementia research in seeking a prevention and/or cure of this horrendous disease and I sincerely hope that these efforts will find success in the foreseeable future!

“ It was about 10:00 before I read the fist chapter of “The Alzheimer’s Diary”. I had to force myself to turn out the light at page fifty. “

“I feel like Joan Sutton has moved into my mind and reads my thoughts, questions, frustrations and understands my daily struggles and failures. She has put into words so beautifully expressed the meaning of this ” long good-bye”. She is brutally honest about AD and the cost on the patient and the caregivers, but her compassion and grace are evident throughout. “

“I am just closing the covers of the exquisitely written reflection on your journey with Alzheimer’s.  You have given both the Alzheimer’s world and the ADDF an extraordinary gift.  You are true to the cause.  You acknowledge the dark side without dwelling on it.  Guided by love, you capture the true meaning of care giving.I thank you for giving voice to the psychological and emotional aspects of the Alzheimer’s journey.  No other writer captures it for me the way you do.”

“This is one of the most beautiful books I have ever read.  It is obviously sad when discussing this dreadful disease – a disease which at this point has no hope for remission or recovery.  But it is also a reminder of what one’s marriage vows mean – “through sickness and in health” and it follows the journey of two people deeply in love and robbed of those final years together.  And yet the author never feels sorry for herself and chooses her path of caring and devotes herself to the love of her life.  Just as “Tuesdays with Morrie” did not have to be read because of Lou Gehrig’s disease, The Alzheimer’s Diary does not have to be read simply because one is associated with this disease.  It is a reminder of how precious life is; how fragile life is and how we must treasure every moment with those we love.  I have bought several books to give as gifts to friends.  It is a little treasure – to be treasured.  My admiration for the author knows no bounds.”

“I got “The Alzheimer’s Diary” yesterday, and spend the day with it.  So much I did not know, thank you for sharing so freely.  “Endless Love” sums it all up. “Lucky, lucky you”. I feel enriched to-day.” R.B. British Columbia

“No words truly can express the admiration I hold for you. Your book is amazing. You are the most courageous and honest person I know. You’ve really bared it all – so eloquently – and so generously.”

“I think your book is spot on and marvelous. I sat down and devoured it in one fast, page-turning read.  You’ve written a very important, timely book, one I am going to order and send selectively to too many women I know who are having thissad predicament and need help. Thank you for sharing all with me and thousands of others. “

What a fabulous book! a great contribution to helping those who are dealing with this disease, as well as an inspirational story of love.”

A Legacy of Caring, the Society of Memorial Sloan-Kettering Cancer Center, (foreword by Laurence Rockefeller) 1996